Major District Road (MDR) 31 passes through Shaha and Kolpewadi villages in Sinnar Taluka, part of District Nashik in India’s Maharashtra state. Overseen by the Nashik Public Works Department, the road provides an important link between sugarcane farms and sugar mills in the area. During peak seasons, the road must handle a significant traffic load. Over time, the road’s subgrade began to suffer severe undulations. It had been constructed on untreated expansive soils, and the deterioration had become so significant that bus service along the corridor had to be suspended.

THE PROBLEM: BUILDING ON DIFFICULT SOILS

The subgrade soil which is common to the area is commonly referred to as black cotton soil. During dry months, the soil is hard and shrinks. During the monsoon season, however, it expands and becomes soft. This seasonal variation presents unique challenges for subgrade construction.

A proposal was submitted to improve the subgrade through the installation of a geocell-based flexible pavement system to address issues related to this seasonal variance – an approach which has proved worthy of consideration in other areas of the world that have similar topography.

Nashik needed an approach that would address the expected loads and desired service life of the road, as well as manage the general CBR strength. However, standard methods were deemed incapable of fully accounting for the expansive shrinkage characteristics found within the subgrade.

Nashik Public Works needed something stronger. Strata proposed the addition of StrataWeb® geocells within the pavement system. Nashik identified StrataWeb as a viable alternative – placing it above the subgrade to create a geocell-based flexible pavement system. They believed it would give the road system a higher-strength, easier-to-implement system that could accommodate seasonal soil fluctuations. Additionally, they believed that StrataWeb would provide a better service life and reduce the maintenance needs commonly associated with conventional approaches.

The existing road was scrapped off and the subgrade was dressed and levelled, as required. The earthworks were then watered and compacted. Next, a layer of sand was placed over the dressed subgrade. StrataWeb SW 356-150 panels were positioned above the sand with the help of metal spikes and infilled with granular sub-base (GSB) material. Finally, after infilling and overtopping with 25mm with GSB, the surface was levelled and vibro-compacted.

StrataWeb provided Nashik with an exemplary solution for the unique challenges of the MDR31 project, in addition to future road construction projects of a similar nature. The StrataWeb geocell system manages the expansion and shrinkage of black cotton soils, and continues to resist uplift and bridge voids between the pavement and subgrade. The unique design qualities have provided a stronger system relative to the alternative approaches that were considered. Nashik realized significant cost savings in terms of construction time, maintenance and materials.

The road’s many local commuters continue to enjoy a smoother ride. 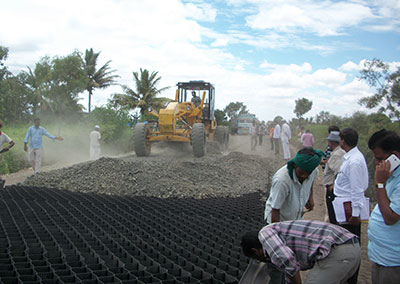 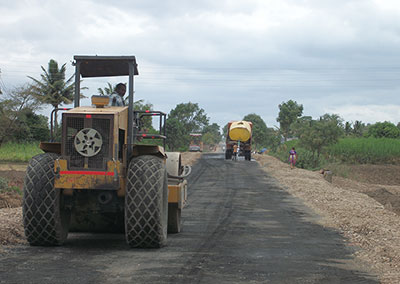 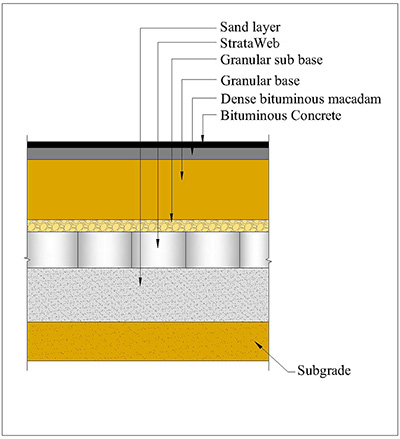